Paul Mueller is an Emmy-nominated, AP awarding-winning journalist with more than 20 years of successful broadcast experience. He is a strong and dynamic on-air personality who is highly proficient in social media and emerging social platforms.

I’ve always enjoyed listening to people and being allowed to tell their stories.  That’s why more than 20 years ago, I began my career in broadcast journalism.  Looking back, I’ve held many roles in a newsroom, including working on the assignment desk, as a producer, as a photojournalist, a reporter, and anchor.  My journey has taken me to cities around the country, including New York, Boston, Tampa, West Palm Beach, and Seattle, to name a few.

It has been quite the journey but it is far from over.  I still look forward to telling peoples’ stories and covering events through a different lens. I’m looking forward to taking on new challenges with greater responsibilities to magnify someone’s voice.

Paul is a polished journalist that would be an asset to any newsroom.

He is a true professional and defines the epitome of what a great journalist should be!

I know Paul to be trustworthy, factual, and fair in his reporting.

View Testimonials
Get in touch

With more than 20 years of covering breaking news involving sheriff and police departments, from Tyler, Texas to Tampa, Florida,
gathering the facts of an incident, putting them together in a way which people will understand, and then relaying that information has become almost second nature.

Many public information officers over the years have given me credit for my work and the reason is simple. I always understood that my job is not paramount when it comes to working any type of investigation. The investigation takes priority while details released to the press come when the time has been decided upon and the information is ready to be released.

Sheriff Chad Chronister of the Hillsborough County Florida Sheriff’s Department once told me that he believed I would love working with an agency and helping them tell their story and “be great at it.” That meant a lot to me coming from the sheriff of the 6th largest sheriff’s organization within the country.

Since I was a child, I’ve always loved animals. When I got older and started living on my own, I rescued 4 greyhounds. With so many others rescuing them and many tracks forced to close, greyhounds were finally getting the lives they were intended to live.

Ironically, it wasn’t a greyhound that began my animal advocacy trajectory. It was back in May of 2016 when I covered the story of a woman who threw a dog named Joe out of a moving van. A Good Samaritan rushed Joe to the vet and that’s exactly where I went. I met Joe in his cage where he was heavily sedated and doctors were coming up with a plan to save his life.

I began a Facebook Live video that would turn my world upside down. As I showed everyone what happened to Joe and then came back on camera and lost my composure a bit, it was a turning point for me. It made me care for animals to a degree I had never experienced.

More than 1.1 million people viewed the 5-minute video and not only did it show people what happened to Joe, it also showed them that people on TV are real people, too. 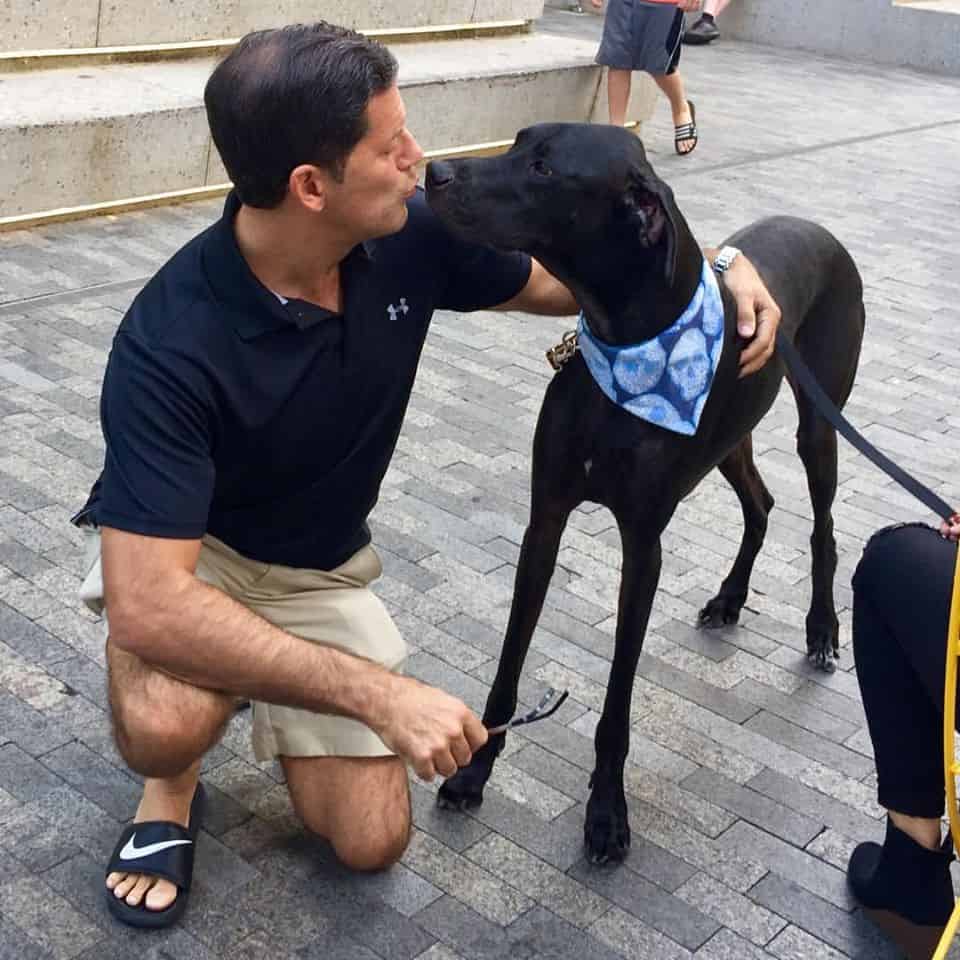 Times have certainly changed since I covered my first presidential election in 2000 though I’ve certainly been able to change with the times.

From hanging chads to the historic election of President Barack Obama and now to election 2020, it certainly has been a wild ride and then politics, as we know, we never know what will happen next. And from presidential elections two Florida gubernatorial elections to elections at the local level, I’ve always had the numbers to call to make sure I knew all the in’s and out’s.

One of my proudest moments while covering politics is the creation of a completely new half-hour political show that I codeveloped and coproduced and anchored in Florida‘s largest political market, Tampa, at the NBC affiliate.

My ability to effectively communicate with the public and with political staffers as well as lawmakers, my efficient and comprehensive writing skills, and my knowledge of the political system allows me to have a unique perspective when it comes to working for a lawmaker’s team.

What began with two internships while attending Boston University led to working on the assignment desk, producing, reporting, getting the memorable images as a photojournalist, and then anchoring whether it be in the studio or out in the field.

From a pandemic to politics and nearly everything in between, I’ve had the fortune of covering stories that took me on the road for more than two decades. From the President to my neighbors and countless others in between, I’ve been a first-hand observer of events with local, national, and international implications.

I’ve been so fortunate these last few decades to have an upfront ticket to the events happening down the street, across the country, and even around the world. I’ve always had questions, wasn’t satisfied with taking no for an answer, and always wanted to make sure to give people a voice.

Feedback from some great colleagues

Paul’s ethics and responsible journalism was beyond reproach!! He is a true professional and defines the epitome of what a great journalist should be!!!

Paul strives to see his work through from start to finish, brings a unique perspective on his story pitches, and has a genuinely warm personality that should be welcomed in any newsroom he desires to work in. I would be thrilled to be able to work with Paul again someday.

He never hesitates to lend an idea, and is never afraid to pound the pavement for breaking news! He has this unbelievable way about him, his energy is magnetic and everyone in the room wants to talk with him and get to know him. Paul Mueller is a joy to watch on TV, but an even bigger joy and honor to have worked with!

He is always a consummate team player and an inspiration to others in the newsroom. Just a joy to be around. His way with people and sincere nature often get him the stories and interviews that others can’t get. His compelling storytelling and presentation skills, and his ability to connect with others, set him apart. He’s an asset to any newsroom. I would jump at an opportunity to work with him again.

I had the pleasure of working with Paul in the early years of his career. From the start you could tell he had the goods- the look, the delivery, the smarts, to be a long-term success. Paul is a true professional. A gifted communicator who makes any news organization he is associated with better.

I have known Paul for 20 years. We started working together as young journalists early in our careers. Paul has always been a tenacious reporter and charismatic anchor. His professionalism in the newsroom and his commitment to also supporting the success of his peers make Paul an asset to any news organization.

Paul was incisive, accurate, and fair in his coverage. Beyond his outstanding storytelling and live shot skills, (not to mention, sense of humor) Paul always exuded a passion for his work that served him well. Paul is a professional and also a kind human being. I enjoyed working with him and he would be an asset to any organization.

He is hard-working and passionate about journalism, accuracy, and advocacy. Working with him as a producer I could always count on him to gather all the facts and to hustle for breaking news. He is a go-getter who does what it takes to make sure his story makes it on the air in a timely manner. He is a kind person and easy to work with. That coupled with all of his experience and knowledge I would welcome the opportunity to work with him again.

I’ve had the pleasure of working with Paul early in his career at KETK in Tyler, Texas. He’s a hard nose journalist who is passionate about finding the truth and telling a story that matters. Paul’s a newsroom leader who motivates, teaches, and supports the people he’s around. He’d make a great asset to any organization that’s lucky to hire him.

Paul has always shown me great compassion for people…. He is truly a hard worker and has more energy than many of his counterparts… I have been truly impressed following him over the years at how he has grasped the new platforms of communication. He leads with information and the passion to be first with factual information. Paul is a polished journalist that would be an asset to any newsroom.

Years in the Business